This has absolutely nothing to do with Cats, but one of the cool things we did on our free day after attending the PIAA Conference in Cairns, was to visit the Bat Hospital 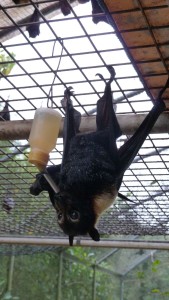 near Atherton in the Tablelands.

As navigator of our self-drive tour through the Tablelands, you can imagine my excitement when reading the map, I discovered the Bat Hospital. I love Bats or Flying Foxes as they are sometimes referred to. So this was absolutely a must see. I adore their cute little faces and they way they wrap their wings around their bodies like a blanket.

I promptly phoned ahead and booked us on the 4pm tour.  On arrival we were greeted by an American volunteer who was somewhat perplexed by Steve’s sense of humour. His comment “Well we’re here, show me where I go to book her in”, clearly went over her head.

The Bat Hospital rescues several hundred injured Bats every year. Most can be nursed back to health and then returned back to their colony. However some are too injured to return to the wild and these Bats stay permanently at the hospital. Most have damaged wings as a result of being caught in barbed wire and cannot fly.

Some are caught in nets and a percentage are also brought to the hospital as a result of cat attacks, so I guess in a way, the story does have a little bit to do with cats. The hospital also provides a sanctuary for Bats that are being retired from Australian Zoo’s.

A tour of the facility costs $20 per person which goes towards the colossal yearly cost of running the hospital. Fruit is by far the greatest expense, costing over $7000 per year to feed the recuperating bats, let alone all the other expenses. The volunteer program also contributes to the fundraising. The thought of volunteering briefly crossed my mind until I heard about the Huntsman spider living in the volunteer accommodation. Snakes I can do, but hairy eight legged spiders bigger than my hand ……..no bloody way!

Anyway, back to the Bats. The hospital is at its busiest during tick season October to December. Around 500 orphaned pups arrive at the hospital during this time, their mothers having died through tick paralysis. Bats struck down with tick paralysis have to be rescued very quickly and hospital workers/volunteers try to search colonies twice a day. A paralysed bat is quickly preyed upon by flies that lay their eggs on the body. Unless rescued, maggots would start eating the bat alive……..a most horrendous way to die.

I could go on, but for those of you that are interested; the hospital has a fantastic website packed with pages of information and great photos. http://www.tolgabathospital.org/

As a matter of interest, New Zealand also has native bats; the Long-tailed Bat and the lesser Short-tailed Bat. Both are critically endangered.