DO ANIMALS GRIEVE – The Story of Smudge & Blotch: 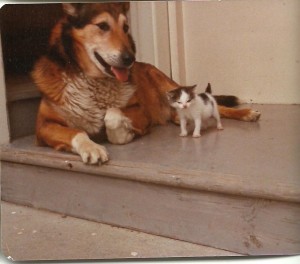 Back in the late seventies, when I was a rebellious teenager, I left home to live with my then boyfriend. Certainly not the done thing in those days, but nevertheless, off I went and we set up home in an old villa by the Dunedin Botanical Gardens. To make our new home complete, one weekend we paid a visit to a local animal shelter and came home with an old dog called Smudge and a small kitten we named Blotch.

As Blotch grew, he and Smudge became the best of buddies and almost inseparable. They slept together, played together, went for rides in the car together, and ate meals together and so on.

Our Villa had a very long hallway and one of their favourite games was to chase each other from the living room at one end of the hallway to the bedroom at the other end. The chase game would keep them (and us) amused for a considerable period of time, until exhausted, they would retire to their bed for a nap together.

One long weekend, my boyfriend and I decided we would take a trip to Christchurch to visit relatives. We could take the dog with us but not the cat. Blotch was about six months old by now. I had seen a cattery advertised not far from us so we decided to book him in. Being so long ago now, I do not remember the exact location or the name of the cattery, but I do remember an old shed with lots of cats running around together. The door was opened and in went Blotch. We drove off leaving him in the company of all his new “friends”.

Four days later, we collected Blotch from the cattery and happily settled back into home life in our dilapidated old villa.

Within a few days we knew something was terribly wrong with Blotch. He had no energy, wouldn’t eat, and was vomiting, hanging over his water bowl but not drinking.

I rang a Vet and explained the symptoms. The nurse immediately asked “has he been in a cattery lately”? Yes. “Has he been vaccinated”?

VACCINATED???? What are you talking about…..I knew nothing about cats having to be vaccinated!!!

The nurse then told me there was nothing they could do for him and he would likely die soon. And that’s pretty much what happened. The next day little Blotch died of “cat flu”.

We were devastated, angry and upset. Why did the cattery not tell us Blotch needed to be vaccinated? Even worse, why did they take him unvaccinated?

We buried little Blotch under a rose bush in the back garden.

Smudge lay quietly on his bed; you could almost see the tears in his eyes. He knew Blotch was gone, he just didn’t understand why. A few days later we caught Smudge out in the back yard; he had dug up the rose bush and was frantically digging, trying to get to his best friend. It was one of the most heartbreaking things I have witnessed.

Dogs & cats grieve and feel loss just the same as humans. The degree to which they grieve, and the recovery time, will vary with each animal.  All we can do as owners is to be there for them and help as best we can.

Lately we have had a couple of cats staying with us at Ashley Boarding Cattery who have lost their long-time best buddy and playmate.  We always give them a teddy bear for company and lots of extra cuddles and attention.

I also thank god that standards and times have changed in boarding facilities since the seventies. You would never be allowed to place your cat in a boarding cattery now without a current vaccination.

I have encountered this problem a few times over the last few years, as rather bemused; I look at owners on the other side of the counter waiting for me to pull a solution out of thin air for their unvaccinated feline. Lucky for them I can……………….. In our purpose built quarantine building. 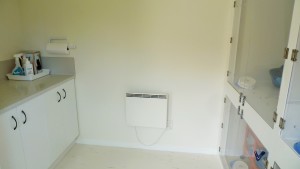 Does your cattery have adequate quarantine facilities? Have you ever asked to see them? What happens to your cat if it gets sick while at the cattery? Where would it be housed away from the other cats?

Infectious diseases are a threat to any boarding facility no matter how clean and how well run. A responsible cattery owner will ensure they have separate, comfortable quarantine facilities where a sick cat can be housed and properly cared for. Most cat illnesses are highly contagious so it is imperative that the cat is isolated as soon as any illness is discovered and appropriate veterinary treatment is sought.

Many cat owners don’t realise that vaccinations do not provide 100% protection against infectious diseases in a pet boarding environment. Owners should understand that the risk of their cat developing cat flu is only reduced by regular vaccination, and will only lessen the severity of the disease if contracted. There are no drugs that will kill the viruses, so treatment is aimed at alleviating symptoms until the cat recovers of its own accord.

Stress in pets when separated from their owners is one of the major triggers for illness. It is thought that around 50% of stressed boarders will shed the herpes flu virus within 2 – 10 days of being at the cattery.

Another known fact is that most cats will be carriers of the herpes virus especially if they have come from a breeder or shelter. These “silent” shredders look outwardly normal, have been fully vaccinated and are yet highly infectious to other boarders.

Feline Herpesvirus and Feline Calicivirus are both causes of cat flu and are spread via both direct contact (eye, nose and mouth discharge), or indirect contact (food/water bowls, bedding, grooming brushes, litter trays, clothing). One of the reasons I am vehemently against communal catteries. It is totally irresponsible to be boarding cats in a communal environment. A communal environment is stressful to cats. Stress causes illness.

In New Zealand the AsureQaulity Cattery Code of Practice recommends that approximately 10% of boarding capacity is made available for quarantine. A separate building is preferable.

Ashley Boarding Cattery has brand new warm and comfortable quarantine facilities in a separate two room building away from the main cattery. Six units in total: four in one room and two in another; purposely built this way so that we can house perfectly healthy, unvaccinated cats away from sick cats.

As a cat owner, boarding your cat at a reputable facility reduces the risk of illness to your cat enormously, however it is also beneficial to all involved if owners also understand a little about how vaccinations work and the basic characteristics of feline diseases.